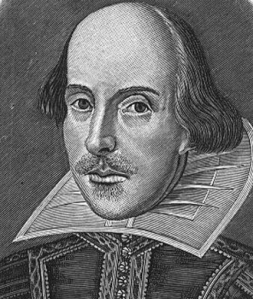 Dear Will – whether on not you wrote the plays, you have been a major influence on all of us who ever read painfully aloud from A MIDSUMMER NIGHT’S DREAM at school or scratched furiously through an essay on ‘The significance of gender and power in Othello’, or some such spurious twaddle, at university. You would probably be appalled – or amused.

Three examples from schooldays stand out in my mind. My first was the reading aloud one. The second was playing Trinculo in a snippet from THE TEMPEST at an end of year drama competition. My best friend, Lesley, played the monstrous Caliban and won the school Drama Prize because of it. It was an all girls school, so not such extraordinary casting. That said, she was an olive-skinned, half-Italian beauty which made her achievement in convincing the audience of the creature’s lumpen ugliness all the more praiseworthy. Incidentally, I was the plain, overweight best friend that such beauties always have.

The third was being bussed from school to Richmond Theatre to see a production of ROMEO AND JULIET in in 1967. Lucy MacDonald annoyed us all by singing Cilla Black’s ‘You’re My World’ in the queue to get in. Francesca Annis played Juliet. She wore a sickly yellowish green dress that we all agreed, from our vast range of sartorial knowledge – we were probably all about fifteen at the time – wasn’t right for 16th century Siena. Some eight years later, Ms Annis was to reprise the rôle of Juliet with the young Ian McKellen as her Romeo. Wish I’d seen that.

The next significant memory is that of being Deputy Stage Manager (DSM) ‘on the book’ for a production of MACBETH at The Connaught Theatre, Worthing. You will gather that ‘on the book’ means sitting at the side of the stage following the script, giving sound and lighting cues and, if necessary, leaping in vocally with a prompt should an actor be unfortunate enough to ‘dry’.

Shirley Stelfox, an actor of extraordinary talent and skill, was playing Lady M. One night, her entrance for the sleepwalking scene (carrying a battery candle, the only one the theatre fireman would allow) was accompanied by a strange shuffling sound moving away and then back. I whipped around to identify the cause of it and saw Shirley kicking off her flip-flops before re-entering the stage in sleepwalking mode. A reminder of this came in the saddest of ways some forty years later. It was at Shirley’s memorial service in Leeds. During her eulogy, Frances Tomelty related – as told to her by Shirley – the same story to we gathered mourners. Afterwards, I approached Frances and told her “I was that DSM” after which we talked of the kindness Shirley had shown both of us. Shirley deserves more than this brief mention and will, indeed, feature in another post that records some of her brilliance plus my admiration and profound thanks. This is her on IMDB

Another noteworthy encounter took place in 1987; I had been appointed to the lowly post of Staff Director with Mike Alfreds’ company at the National Theatre. Judi Dench and Anthony Hopkins led the cast of ANTONY AND CLEOPATRA which was playing there at the time. One day, whilst trying to extricate myself from the labyrinth of backstage passages linking the three stages, I turned a corner only to face Anthony Hopkins clad in Roman military tunic, bare legs, sexy blue eyes and all. Never one for being cool, I stood transfixed. “Hello,” he said, cheerily, then continued talking to a companion. I remained, rooted, unable to move – probably gaping, too, for what felt like several millennia.

My cousin, Andrew, remarked drily when I admitted my gaffe to the family: “You really should stop taking your autograph book to work, Lynne”.

Just as a slight detour to the theme, while at the National – until the entire company was sacked for not getting enough bums on seats – I worked on two five-hour plays (therein lies the clue – bums can get very numb over that period of time) – THE WANDERING JEW and COUNTRYMANIA. It was an ensemble company that included Mark Rylance – who was, later, to become Artistic Director of The Globe Theatre. Advisor to The Globe was Professor Andrew Gurr, my Drama and Shakespeare tutor at the University of Reading.

I have directed Shakespeare, too. One infamous production – professional but really shouldn’t have been – was another MACBETH. There are many reasons the play is regarded as a ‘bad luck’ play, from the Witches’ spells and chants (superstitious companies usually cut a few lines) to the multiple sword fights that imperil unwary actors. My production, however, suffered from another setback. The wife of the actor playing Macbeth forbade him from kissing the actor (actress in those days) playing Lady Macbeth – on stage! The wife was Malaysian and I assumed that, perhaps, her culture did not encompass European theatrical practices – or detachment. I spent a trying hour or so with the feisty little woman in the theatre coffee bar, trying to explain rôle play and the dramatic necessity for some affection between the Macbeths. She grudgingly agreed to allow the stage relationship to go ahead, but attended every performance thereafter to ensure nothing funny went on in Cawdor or Glamis. It certainly didn’t.

Some months later, real-life wife rang from Malaysia to ask for reassurance that her (probably infuriated) husband hadn’t had an affair with Lady Macduff. He must have given up acting. I never heard of him again.

The dreaded schools tour meant adapting and presenting ‘gobbets’ (as another favourite university tutor would say) of two further Shakespeare plays, Henry IV part one (Connaught Theatre, Worthing) and Twelfth Night (Young Vic Studio Theatre). I have also designed and taught introductions to Shakespeare at the Webber Douglas School of Drama and The Royal Scottish Academy of Music and Drama. TWELFTH NIGHT provides some opportunity for very broad humour. After working on ‘the letter scene’ where Malvolio believes, absurdly, that a letter he finds has been written by his employer, Olivia, one of the drama students threw a major tantrum – this was being disrespectful, he ranted, “Shakespeare isn’t supposed to be funny!”. I blame the secondary schools.

And – I almost forgot  – I adapted MUCH ADO ABOUT NOTHING for the BBC World Service, directed by Gordon House. 1986, I think…

I just couldn’t list the numerous performances I have seen and enjoyed – or not. But sitting under umbrellas in a downpour watching A MIDSUMMER NIGHT’S DREAM – to the bemusement of a Texan cousin – stands out, as do several absolutely stunning productions by CHEEK BY JOWL theatre company.

And linking back to one of my featured writers, Madalyn Morgan, I remember well her playing minor roles in THE TAMING OF THE SHREW and Iras in ANTONY AND CLEOPATRA in a season headed by Vanessa Redgrave and Timothy Dalton at The Haymarket Theatre. Maddie was also understudying Ms Redgrave and – at very short notice – had to go on as Cleopatra. The mere thought of undertaking that makes me quake with terror. What a star!

‘The web of our life is of a mingled yarn, good and ill together…’ (ALL’S WELL THAT ENDS WELL). Yours and mine both, Will. Many Happy Returns!

5 Responses to Happy birthday, dear Will!