Break a leg. As most of us know, it’s a theatrical term wishing a performer good luck. But where did that phrase come from? One theory is that it relates to John Wilkes Booth, the actor who played his most villainous rôle when he assassinated President Lincoln at Ford’s Theatre, Washington DC in 1865. As he jumped to the stage to escape, he broke his leg. So maybe the saying grew out of some fairly dark humour, a favourite retreat of actors. It could also originate from much earlier. Actors would bow or curtsey at each curtain call; the more the calls, the greater the likelihood of breaking a leg – meaning ‘hope the show’s a storming success’.

My husband Martyn is neither theatrical nor an assassin but somehow, without my even suggesting it, ended up like this during a brief jaunt to Cornwall: 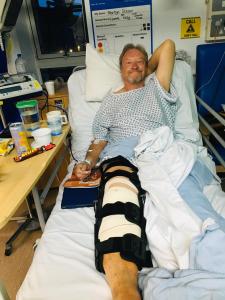 That’s the summer ‘Gone for a Burton’ – a phrase from WW2 when Burton’s Ales (UK) ran an advertisement of a football team with one player missing – he’d ‘Gone for a Burton’. Following this, the RAF adopted it as slang for a missing pilot who had crashed into the sea (known as ‘the drink’) – hence he would no longer be in a team photo – he’d ‘gone for a Burton’. I acknowledge here Albert Jack’s fascinating ‘Red Herrings and White Elephants’ (Metro Publishing Ltd, 2004) from which I elicited this and, frequently, various other quirks of idiomatic English. How very sad, though, that a remark I heard often while growing up came from such a tragic source.

Oh well, time for me to ‘put a sock in it’, a phrase from the days before sound mixing desks. When the horn section drowned out the strings or wind sections they softened the sound by, literally, putting a sock into the mouth of their instruments. So here’s me, making less noise. And putting socks on Martyn’s poorly feet.

Writer
View all posts by Lynne →
This entry was posted in Cornwall, Humour, Life on the edge, Personal, Writers, Writing and tagged contemporary Fiction, Cornwall, Hospital, Humour. Bookmark the permalink.

3 Responses to Break a leg…