Today’s writer, James Collins, lives the dream. I met him a few years back when my husband, Martyn, and I returned to the island where we spent our honeymoon. James and his husband, photographer Neil Gosling, are established residents of the island community and play significant roles in Symi life. I can always touch base by dropping in to read James’s posts on his website Symi Dream.  For a nosy person like me, one of the most interesting aspects of interviewing authors is hearing details of their lives and pursuits and being impressed by their story… 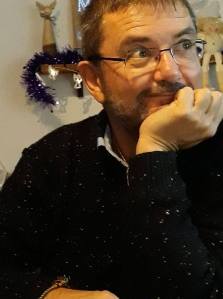 Yassou, James, impress everyone else…  Hi. I am reluctantly British but happily living in Greece where I make my living from writing. I am 56, married, and have published 11 novels as James Collins, plus a further ten under a pen name. What first inspired you to write?   School teachers. When I was 11 to 13 at a decent prep school, I showed a flair for writing stories and being on the stage. My English teacher had me reading things like 1984, Brave New World and others a little beyond my reach, but I stayed with them. Then I read Dracula and never looked back. Maybe it was Bram Stoker’s way of telling the story through ‘real’ events that caught me, but I reckon it was a string of excellent English and Music teachers. What was your first piece of creative writing? How old were you?   An English lesson at school when I was 12. The dreadful Moorgate tube disaster had just happened, and our teacher asked us to write a story inspired by the event. I came up with something about explorers in a collapsing pyramid, the teacher liked it so much he asked me to do a second draft, and it won an in-school award of some sort, thereby teaching me the benefit of rewrites. From then on, I had this thing for telling stories. Which writers do you particularly admire?   There are so many, and it depends on the genre. I love Stoker’s Dracula and the Jewel of Seven Stars, but not his others. I like John Steinbeck in the American lit. department, and Peter Ackroyd in the history department. I tend to read mainly factual and history books along with biographies, rather than novels. What do you love about writing?   Making it up as I go along, that is when I haven’t had to plan a detailed mystery or adventure. I write very much ‘stream of consciousness’ style at times, and that leads to me dropping in twists when I least expect them. I particularly enjoy the research and combining factual history with invented history while I try and solve my own puzzles. What do you hate about writing?   I’ve always disliked the way people assume a writer doesn’t do anything. “Oh, you’re at the café again?” Yes, I am, but I am thinking, plotting and planning, and I’ve been up and at the desk since five in the morning so after 12 hours, it’s time for a break. It’s that working from home thing; everyone assumes you earn loads and don’t do any work. Oh, I also hate the publicity side of things, so I don’t bother with it apart from my own blog and Facebook. I’m always on the lookout for someone to take on the job but the best person to do it is me, and I’m not interested, lol. Describe your ‘portfolio’ of writing I write in various genres. I have four books about my experiences of moving to and living in Greece; SYMI 85600, CARRY ON UP THE KALI STRATA, VILLAGE VIEW and SYMI, STUFF & NONSENSE. In these, I play around with a Bill Bryson kind of style and humour.

I also write mystery/adventures and have a series of three ‘SADDLING’ books; THE SADDLING, THE WITCHLING and THE EASTLING. A fourth is planned to complete the series. These are more lyrical but have an action plot, family history, an invented dialect and mystery.

Then there are the comedies such as REMOTELY, a gay/straight body swap comedy satire, and others. Most of the time I write what people call mashup novels. Under my pen name, Jackson Marsh, I write MM Romance and adventure. What is your proudest achievement?   Well, last year I won ‘Best Feature Screenplay’ for an adaptation I did of a book (GIRL GONE GREEK by Rebecca Hall). I was awarded that by the London Greek Film Festival in Athens, which was rather an honour. I was also proud to receive a ‘Special Award for Creativity’ by the Arts Council of Britain for a musical thriller I wrote and staged several years ago. But probably the proudest moment was marrying my partner of 20 years on Symi, in Greece in the island’s first same-sex civil partnership in 2017 – on my husband’s 50th birthday. What is your current project?   Yikes! Currently, I am writing for my pen name, Jackson Marsh. I’ve started on a series of romance/adventure/mystery mashups set in Victorian England. Part one (DEVIANT DESIRE) has just come out, part two (TWISTED TRACKS) is out in May, and I am bashing on through part three (UNNATURAL ACTS) while planning part four (untitled). My James Collins books are currently on hold, but I do need to complete my Saddling series with the fourth instalment, and I will get to that once THE CLEARWATER MYSTERIES have run their course. Anything you’d like to add?   Only that if anyone wants to find out about my daily life on Symi, Greece, I have a blog which I update six times per week. It covers not only local information when I hear it, but also the day-to-day experience of being a writer. It can be found at www.symidream.com (What James was too modest to include was the movie he scripted, THE 13TH (1066 Films), based on his novel, THE JUDAS INHERITANCE, funded on Kickstarter and shot on Symi in 2014.) Efharisto – thanks – for joining me today, James.  James’s links Website:    www.symidream.com Symi Dream Facebook:   https://www.facebook.com/SymiDream/ Amazon Author:    https://www.amazon.com/James-Collins/e/B005C7HWJI Facebook author page: https://www.facebook.com/jamescollinsauthor Jackson Marsh Website:    www.jacksonmarsh.com Facebook:    https://www.facebook.com/jacksonmarshauthor/ Amazon author:  https://www.amazon.co.uk/l/B077LDT5ZL