Jigsaw Island in the latest edition of Mslexia, the women’s literary magazine. 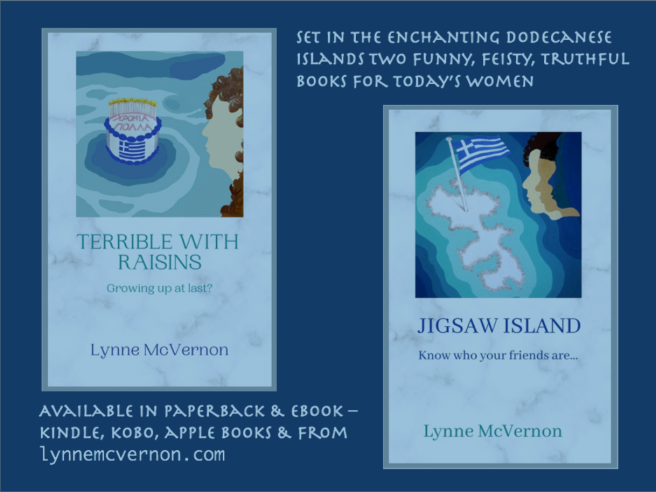 Links to Jigsaw Island and prequel Terrible With Raisins at: https://lynnemcvernon.com/get-books/

Review: The Unravelling of Maria by F J Curlew

It’s always a bonus when a book takes you travelling and The Unravelling of Maria offers much to learn about place and recent history. Two lovers separated by war and mischance provide the emotional theme, and an unlikely friendship adds depth and credibility. The author deals with some tough topics in a realistic manner, neither skimming over nor sensationalising difficult issues. I found myself empathising with Maria and Angie early into the story as they both faced challenging situations. Jaak’s story has a wider sweep, tackling the hardships of war, injustice and deprivation. As the title suggests, it is a slow reveal, but is never less than engaging. Scotland, Estonia and Siberia provide the backdrops to this interesting book. This novel is well researched and the writer has a clear connection with some of the locations. Add to this an eye catching and beautifully fitting cover design. I look forward to reading more by F J Curlew.

Thank you to Pauline Barclay and CHILL WITH A BOOK readers

Many thanks to Pauline for her enthusiasm for promoting Indie writers and to the readers who make the award possible… Delighted that JIGSAW ISLAND is your choice.

Thank you, Jenny and Bob for taking the time to read the book and share your thoughts.

Reviewed in the United Kingdom on 16 November 2020
In JIGSAW Island the author so skillfully conveys incredible insight into a complex-wide range of contemporary social and emotional issues. Ranging from a teenager coming to terms with adoption, racial prejudice and homelessness. Seeking sanctuary on a Greek Island only to have personal problems brought into perspective by the plight of refugees arriving on Greek islands in flimsy boats. This book helps one to more compassionately understand what is happening to human beings so often depicted as almost “a problem’ in the European media each day.

This is a very entertaining book, a really good read. The family drama draws you in, with engaging characters and plot twists. The setting is so beautifully evocative you will forget the grey UK skies. The ideal book to curl up with on a Christmas evening in front of a roaring fire.

Thanks to Guy Verhofstadt for posting about Kristallnacht yesterday. Known, too, as the Night of Broken Glass and the November Pogrom(s), it was a pogrom against Jews and civilians throughout Nazi Germany on 9–10 November 1938, carried out by the Sturmabteilung, the Nazi party’s original paramilitary wing. The German authorities looked on without intervening. The name Kristallnacht (“Crystal Night”) comes from the shards of broken glass that littered the streets after the windows of Jewish-owned stores, buildings and synagogues  were smashed. The pretext for the attacks was the assassination of the German diplomat by Herschel Grynszpan, a 17-year-old German-born Polish Jew living in Paris.

Chancellor Angela Merkel on Monday spoke of Germany’s shame over the events of Kristallnacht and recognised that the blight of Nazism is still with us.

It is ironic – or perhaps appropriate – that we hold Remembrance Day observations on the day after this anniversary. We remember the fallen in WWI and every conflict thereafter, but do we think deeply enough about the causes of war and what has actually happened since 1918? Concentration camps were not restricted to WWII; they were a horrific aspect of the war between Croatia and Serbia when concentration and extermination camps were run in Srebrenica, Omarsk, Jasenovak and others. We, in Britain, knew it was happening then, just as we knew it was happening in WWII and chose not to see it until many had lost their lives in the most inhuman of circumstances. Shamefully, it was the British who instigated the practice of concentration camps in which 48,000 people died during the Second Boer War, 1899-1902.

Within 2 months of Kristallnacht, the first German Jewish children arrived in Britain in what was termed Kindertransport. It was a humanitarian welcome of which the British should be justly proud – a stark contrast to the current Tory government’s edicts on refugees, some of whose ministers are even the descendants of them. By extension, the outgoing US President, so admired by our Prime Minister, separated children from their families and even had them incarcerated in cages. It is unknown how many still await reuniting with their families. While many NGOs and humanitarian groups support refugees, the political world, with the notable exception of Germany, does not seem to have moved on far enough.

When I was writing my last novel, I researched the condition of refugees in the Greek Islands and met private and professional people who gave their time and care, in addition to material generosity, to the rescue and support of displaced people who journeyed to their shores. Here in Britain, I have been in touch with Aegean Solidarity Network UK (which I first encountered in Symi through one of its founders, Andrew Davies), and Refugee Support Devon, which offers support from education to legal assistance. Through the latter, I met Alaa, a young Syrian who has become a friend, and whose real life story appears at the end of Jigsaw Island.

Through him, and the people I met in Symi and Leros, I have a better understanding of the wretchedness and fear so many refugees endure. I have also conducted drama workshops in an Immigration Return Centre. It was a dour place. One of the exercises I did was for participants, one by one, to describe a room that was very special to them – and then invite another person to share the space. It was a moving experience for us all, with happier memories and significant experiences evoked. Some of the brief conversations I was able to have with detainees described a more harrowing past. I particularly remember a young man, almost dull with acceptance at the terrifying reception awaiting him on his return to Gaza by Hamas for evading conscription to their force. Another man had been in the centre for three years waiting for legal processes to grind to a resolution. When I hear people in the UK complaining about acceptance and support of refugees, I am utterly sickened and ashamed. All I can think to say is ‘Walk a mile in another man’s shoes’.

This is a photograph I took of a refugee child awaiting processing with his family in the ‘hotspot’ on Leros. It doesn’t say it all – but it says a lot. 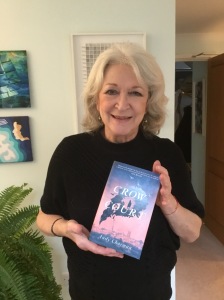 McV with copy of CROW COURT

Andy and I met on an Arvon Editing course in 2018. He read an extract to the group and I was enchanted. Can’t wait to read it!

Many thanks to LORRAINE MACE, creator of the hugely popular D.I. STERLING series (https://www.lorrainemace.com/d-i-sterling-series/) for including JIGSAW ISLAND in her blog today.

Thank you to David Tucker for this lovely review on Goodreads September 22, 2020

A very timely, humane book, full of heart and humour. It is believable and its structure is never contrived. One is drawn in through the alternating first-person narratives that take the reader on journeys both emotional and locational. There is a real sense of authenticity about it that manages to tell very personal stories while shining a light on the very global issue of the ongoing refugee crisis. 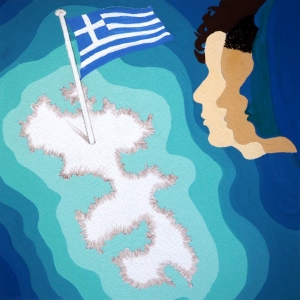 Review: The Girl from the Hermitage by Molly Gartland

Fascinated by this period of Russian history since a teenager – after watching Dr Zhivago – I wanted to review Molly Gartland’s The Girl from the Hermitage, and I’m glad I did. Inspired by a portrait discovered by the writer in Moscow, a tragic sweep of decades is reflected in the lives of one woman, her friends and family, progressing through WWII, Perestroika and Glasnost to the 21st Century. Starting in 1941, the contrast between deprivation during the Siege of Leningrad with conspicuous consumption in 2016 carries the sense that, somehow, nothing changes, just the nature of the venality, fear and suppression. Galina is the girl from the Hermitage, as a child, living through the siege in its cellars with her art restorer father, following the death through cold and hunger of her mother. When he is commissioned to paint the portrait of the young sons of a colonel, the difference in wealth and lifestyle between himself and his sitters highlights the callous dishonesty of Stalin’s military, a negative precursor to the Soviet concept of egalitarianism. Galina becomes an artist and we follow her experiences, the theme of art and portraiture interweaving with the growth of capitalism, and overshadowed by increasing corruption. Enough of the plot; the characterisation is truthful and engaging, relationships as simple and complex as reality. Galina is a heroine of talent, wisdom and restraint, patience being her heritage from life in the Hermitage. As she aged through betrayal and injustice, I found myself angry and frustrated on her behalf and wanted to know what became of her – the mark of excellent storytelling. Molly Gartland’s knowledge of and connection with her subject is evident throughout; so firmly rooted in reality, the writing is also rich in imagery and attention to detail without ever halting the narrative. This is a book to be savoured and to learn from. Thank you for letting me read it.

OK, opening the barrier, and about to give away one of my secrets. Not that I have a bronze medal for Scottish Highland and Country dancing, not that I was asked to give up maths in 5th year because I was causing the teacher anxiety, and not that I pretended, when I lost my train ticket in 1967, that I was French and couldn’t understand the ticket collector at Raynes Park.

The secret I’m about to give away is one that many fellow writers share, and that is…when you say you’ve bought our book on a specific day, or will by our book, we can always tell whether or not you have because…

THE GODS ARE WATCHING YOU 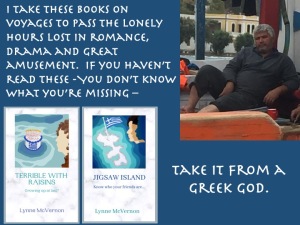