Of pubs – and Covent Garden – and backstage – and first love….

I’ve just entered a new short story in a competition and for it delved into memories of very early days working backstage in London’s West End. I am actually old enough to remember the old Covent Garden when it was a fruit, veg and flower market. Looking back, it’s a rich and fascinating resource. Many market porters would work the theatre shows as stage crew, then go on to do their portering jobs at the market. The pubs around there and the other markets – Smithfield (meat) and Billingsgate (fish) – had special overnight licences to accommodate porters, traders and buyers. A clever – or dedicated – person could drink 24 for hours in and around London if he / she knew the right places to go. As a novice properties assistant, I was taken ‘under the wing’ of a few of these wily fellows and taught to drink. So committed were they that they’d slip out to the pub between scene changes. One or two pubs even had a bell in the bar to warn of imminent curtain fall. Sir Ralph Richardson, then appearing in ‘Lloyd George Knew My Father’ at The Savoy Theatre once cut half a page of dialogue and caught us out, imbibing upstairs in The Coal Hole. We were threatened with sacking for missing the scene change, shamed and grounded for the foreseeable future (but, by degrees, crept back into our old ways).

Several years ago (many, in fact, having just checked dates), I looked in at The Coal Hole to see whether it had changed. It was a little more plastic and ‘foody’ than it had been in the early seventies. But my attention was immediately taken by a distinguished drinker sat like royalty amongst an audience of admirers; holding court there in the venue of my former disgrace was the famous, charismatic Richard Harris. He looked as though he’d just walked off the set of Harry Potter with his long silver hair splayed around his shoulders (he was, of course, the first screen Albus Dumbledore). What a loss he is to the worlds of film, theatre and alcohol.

At the side of The Coal Hole is a flight of stone steps that leads to the Stage Door of The Savoy Theatre. It was down these that my dipsomaniac colleagues and I pounded to catch curtain cue then climbed after the show to spread our custom fairly to the other Covent Garden pubs. 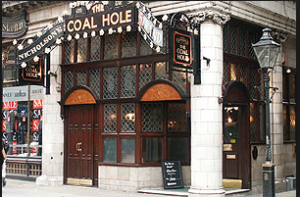 And it was on those stone steps that I shared the first kiss with my first – and desperately unsuitable – love. Who knew that I would go on to experience so much and learn so little?