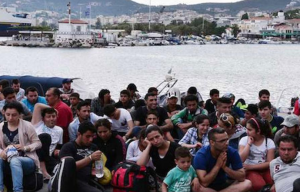 Much as I enjoy humour, increasingly I see the balance between comedy and tragedy. Like yin and yang, they are co-dependent, one acting as a foil to the other. At Reading University, we students were given a stern rebuttal of the theory that Shakespeare’s ‘comic relief’ is there to ‘lighten up’ the serious content of a play. The argument was that what many see as light relief is, in fact, a reflection on the darker elements of a play delivered in dramatic contrast to give them dimension and greater potency. The Porter’s speech in Macbeth is an excellent example.

As I write my second novel, Jigsaw Island, set in the Greek Islands of Symi and Leros, I am struggling to find comic irony in the crisis that faces refugees and the islanders who offer them aid. Not even bitter comedy feels appropriate. The further I investigate, the more outrage I feel, the greater becomes my anger at the Western powers who have caused and now perpetrate the conflict in Syria and elsewhere. Their failure to alleviate the appalling suffering of thousands of displaced people or assist those who are prepared to help them is both abysmal and callous. The misery on one side and contempt on the other continue and the media is losing interest.

The research I have done relies in part on personal experience of the islands and contact with friends and acquaintances who are or have been involved with assisting refugees. They tell some very dark stories. I will continue to wrestle with a way of using comedy as a literary device to prompt consideration because I believe that provoking amusement then asking the viewer or reader to question their reaction is a powerful tool in the writer’s kit.

Jigsaw Island will be a darker novel than its predecessor, Terrible With Raisins. But I’m working to create equally engaging characters who are capable of inspiring laughter as well as illuminating uncomfortable truths in theirs and the lives of others.

2 Responses to Jigsaw Island – finding the comedy in tragedy