– is the day I never know what to do with – including writing grammatical sentences. It’s a hangover, I think, from early childhood when, once a week, the awful prospect of SUNDAY SCHOOL faced me. As if it were not enough going to school every weekday. In fact, following my first day at school, I was highly affronted that I had to return the following day, nobody had told me that going to school went on for years.

(Left – me pre-Sunday School days, pre-schooldays – see what a happy little poser I am?)

There was further affront on Sunday mornings. They were kind enough people, I suppose, most of the attendant Sunday School teachers, but there was the odd bully – usually a single lady embittered, maybe, by having nothing better to do at a weekend than try to din godliness into snotty-nosed kids* (see Footnote).

Despite this, I became deeply religious – well, not so much deeply religious as fascinated by the stories: Jonah and the whale, Daniel in the lions’ den and knocking down the temple, Lot’s wife turning into a pillar of salt (Fascinating! Nobody explained where Sodom was, though, and how it was connected to the sin of sodomy. Nor did anyone explain what sodomy was to us six year-olds). My supposed religious fervour was aided, somewhat, by someone giving me a pictorial bible, for Christmas, probably. No Gameboys or space hoppers in those days. My fixation lasted until I was about nine when the rose-tinted spectacles shattered and the scales fell from my eyes; I was no longer seeing through a glass darkly. At the local Baptist church we had to watch a film of Billy Graham, preaching somewhere in London, and then were asked to stand up at the end if we’d been saved. Most of my contemporaries did. I didn’t. From then on, my card was marked. Yeah, well it’s my blog and I can be verbose and bitter if I want.

I was still forced to go to church until I became such a stroppy teenager that my parents’ nerves weren’t up to it. At secondary school, I was summoned by the headmistress during assembly one morning – in front of the entire school – to see her in her office immediately after. As I arrived trembling in her musty study, thinking she was going to tell me my parents had been killed in a car crash, she launched into a diatribe about my not paying attention and distracting the other girls. I may not have been paying attention but remember having sat rigid, staring at the floor (we still had to sit on the floor) as I normally did. She’d obviously got me mixed up with another girl – there were over 600 of us. I didn’t dare disagree that I’d been messing about but, in shock and anger, I told her I was an agnostic. At 13, I wasn’t entirely certain what that was but I knew it was something to do with not believing in god.

Then I had to go back to lessons, a soggy (yes, there had been tears), shaking mess, and face the malicious delight of all the other girls. I suppose I should name and shame the headmistress but, as Michelle Obama said so many years later, “When they go low, you go high”. So, I’ll leave her anonymous, but… sod (and I know what it means, now) the headmistress of Wimbledon County School for Girls, hope she roasts in a hell filled with non-believer adolescent girls, all suffering PMT and pungent BO. Even if she doesn’t, I had a sort of revenge throughout my secondary school career, thereafter, staring up from the floor to the stage every Assembly at her fat ankles bulging beneath her academic gown. Looking back, I suppose she had to take out the unkindness of nature on someone. 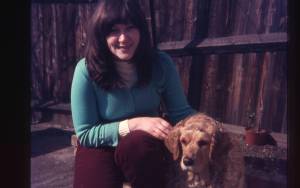 (Right – me post Sunday School, post-school – by the hairstyle, it must have been Art School Days – with Golden Retriever, Lucy. See what a happy little hippy I am?)

*Footnote
And more often than not we were – snotty-nosed. Chesty colds were rife in smog-infected London on the 1950s. The fogs/smogs were, indeed, pea-soupers, being a malevolent green in colour and so thick you really couldn’t see more than two metres ahead of you (yards, then, of course). I remember my mother guiding me to school with a torch on winter mornings, scarves wrapped tightly round our faces to filter the filthy air. The Clean Air Act was 1956 – but the air didn’t clean up for long while after that. Reminds me now of the Witches in Macbeth – ‘Fair is foul and foul is fair, hover through the fog and filthy air’ – except we plodded, up Lyveden Road and left into left into Devonshire Road. 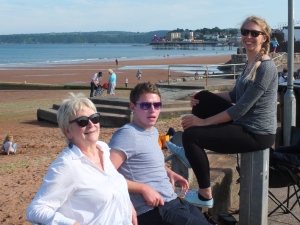 And there’s the link. Now, I live in Devonshire and the air is clean as a whistle – most of the time. (Seen here in Paignton with stepchildren Jon & Sarah. See what a happy Wicked Stepmother I am?)  And I still like reading and hearing stories, but not biblical ones any more. Oh, and now I write them, too. And publish them.

Thanks for your indulgence.