Traditional Easter in Greece and – well – other aspects in Britain

Greek Orthodox Easter isn’t always at the same time as the Anglican, Protestant and Catholic festivals. This year it falls a week later, with Easter Sunday being on 28 April.

In Symi, the sombre observations of the preceding Holy Week are marked by the tolling of church bells. By contrast, the delicious aroma of Easter buns baking in almost every homes tantalises the olfactory senses.

On Good Friday, there is a solemn march through the streets to churches, carrying decorated icons. The mood lightens on Holy Saturday when the Resurrection of Christ is celebrated with fireworks – to the delight of most observers excepting wildlife, strays and pets. Local Easter dishes include soup, shortbread, pies and to red-dyed eggs.

Easter day is crowned by music, traditional dance, more fireworks and  the burning of Judas in Yialos Square, down by the harbour. Why do we still love perching effigies atop a bonfire? Judas in Greece, Guy Fawkes in much of the UK and, notably, The Pope in the normally civilised town of Lewes in Sussex. 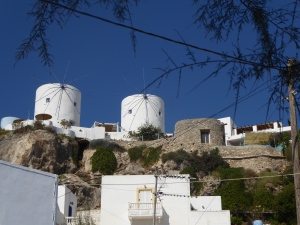 During the Easter week on Leros, houses become one big kitchen as families start to prepare all the traditional food which is eaten after the 40 days of lent.  On Good Friday, children collect lavender which they  spread over the streets and at the main square of Platanos, where later on, the shrine with the sacred icon will pass.

Saturday at Midnight the whole island meets in the churches to celebrate the resurrection of Christ. At the end of the service the congregation will light a candle each from that of the priest, the light which was brought from Jerusalem, and take it home to their own altar. A sort of Olympic flame in reverse.

On Easter Sunday all of Greece is celebrating. Almost every household dines on roast lamb. This is hard for a vegan to record or admire… 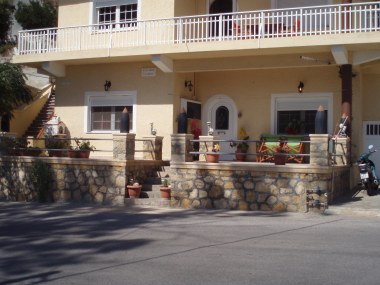 Celebratory fireworks on Leros are a whole different event. Yes, there are the regular fireworks, starbursts, rockets, Roman Candles etc.  But there is an added ingredient, diminishing over the years, that makes Lerian firework displays startling and, sometimes, lethal. This is due to the intense fighting on Leros during World War II when German forces were anchored in Lakki, the deepest harbour in the Eastern Mediterranean. Ordnance, both used and unexploded littered the island. In later years, it became a matter of pride for young men undergoing a rite of passage endurance test to acquire and detonate such trophies – and one of unending anxiety for their parents. Other Lerians have utilised the weaponry for for more imaginative purposes than a measure of testosterone levels. Take a close look at the gateposts…

Sadly, miles from the cloudless skies and wine-dark seas of the Greek Islands, we spent Easter Saturday on a jaunt to Looe in Cornwall. I had forgotten how commercialised the town was. It was heaving. Far from displays of traditional dance and a selection of Easter fare, there were packed pubs and acres of pallid flesh on display for the first time this year. And, oh dear, the British were not at their best.

Writer
View all posts by Lynne →
This entry was posted in Greek Islands, Humour, Life on the edge and tagged Greece, Humour, Leros, Symi. Bookmark the permalink.