Non-parent writing about parenting issues – where have I gone right?

Having ducked out of the whole breeding issue, I stand as an observer of friends, family, colleagues – and partner – who have all trodden that uneven path. I’ve been lassoed in from time to time, as a totally unprepared stepmother, and as a godparent. Being without a god of my own, I declined the ‘god’ bit, but am still fond of the kids and have become close to other children of friends. So why have I featured motherhood so strongly in my writing, both close and dysfunctional? Maybe exploring it intellectually? Apparently it works, though, readers are convinced by it. An example from TERRIBLE WITH RAISINS – Clair and 17 year old daughter, Jess visit a Symi beach by taxi boat. Any comments?: 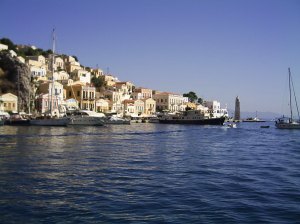 ‘We’ll have been here a whole week by this evening.’
We were having breakfast on the terrace – nonchalant, now, about the view. Jess continued, contemplative.
‘You know, it’s really odd about holidays. You’re having a good time and you think ‘I want it always to be this moment’. And you try to hang onto it but it goes racing away and you suddenly find yourself in another moment on a wet day in October remembering the moment you were trying to hang onto. Except we’re here, now, and it’s holiday and it’s wonderful!’
She wiped a dribble of Symi honey from her chin and squinted out across the harbour.
‘Shall we go somewhere else today? Oh – d’you mind if I go for a drink with Nikos tonight?’
The last was tacked on so casually it was difficult to object. I wondered how long the assignation had been on her agenda. They met at the supermarket while I was talking to Fraser on Monday – before we went to Nimborio! Sly little… At least the arch manipulator was being deferential. I OK’d it.
As we waited for the next Nanou boat I squinted around the harbour for Richard’s white hair. Or Mandy’s blonde. Failed on both. When the boat arrived we headed for the prow to avoid the exhaust of the engine and the tobacco fumes of the two-man crew. Jess hissed in my ear.
‘Look – there’s that woman with the purple face, you know, the one who was so arsey on the boat coming back from Sesklia. Huh – Arsey Purple!’
I glanced round instantly catching the woman’s narrow eye. She stood with a little man who looked spookily like Charles Hawtrey. I pointed him out to Jess.
‘Who’s Charles Hawtrey?’
On the boat, we played a ‘Who would we least like to meet here?’ game. Number of points dependent on level of undesirability. My sort of partner, Howard was Jess’s opening gambit, for which she claimed a thousand points. I vetoed it as too predictable. After a tussle over rules Jess conceded, provided that her Granny Connie and step-grandfather, Joe, were also excluded. Play recommenced with Brenda next door at home in Aborigine Road, for fifty points. And so it continued with teachers, ex-employers, sometime friends and foes. I hurled in Jess’s contemporary, Sharn (sic) Fellowes, for twenty-five points. Sharn had dressed like a hooker since age nine and spoke to her elders as though they were dung beetles.
‘But Sharn’s a good laugh!’
I wouldn’t budge. Counter attacking, Jess threw in Harry Whelkin, self-appointed convener of Aborigine Road Neighbourhood Watch and right-wing bigot. I had to admit it was an excellent call, boosting her score to three hundred.
‘So why do you suck up to him, Mum?’
‘I don’t. I’ve been to a couple of meetings because we have been broken into twice.’
‘So why did you go to his barbecue? You said it would be like a white supercilious convention.’
‘White supremacist. I couldn’t think what else to do with Howard.’
Oh tits. Played right into her hands. Jess looked at me solemnly.
‘Are you that lonely, Mum? That you have to be with him?’
‘No, I’m not lonely, darling. It’s like that old song, ‘If you can’t be with the one you love, love the one you’re with’. Except there’s no one I love that I can’t be with. But I may as well be with someone when it suits. So – Howard.’
‘I so don’t understand you!’
She could have asked now if I had loved her father. It perplexed me that she’d never wanted to know about him. In her position I’d have been eaten up with curiosity. Maybe she was waiting for me to say. Or maybe she was intuitive. Or perhaps she realised that his role wasn’t important – well, not important to our relationship. It was all getting too serious. I played an ace.
‘Rita Whelkin!’
Jess was caught off guard but delighted.
‘Oh yes – no! Bleeurrrghhh! Vomit, vomit! Ten million trillion points – and a zillion for her wig and her dog!’
‘I win, then?’
‘I’m a slaughtered daughter! Look – my guts are splattered all over the boat and my bum hole’s landed on Arsey Purple!’
At Nanou Jess went straight to the taverna and ferried two beers back to the shade of our parasol.
‘Here’s to everyone we don’t want here! Long may they be somewhere else!’
‘Yamass!’

1 Response to Non-parent writing about parenting issues – where have I gone right?