John and I have never met but we have in common a love of the Dodecanese Islands and, of course, writing. I got to know of John from a Facebook page he administers: A Good Greek Read. Obviously a prolific writer – it’s been quite a challenge to include all his covers… 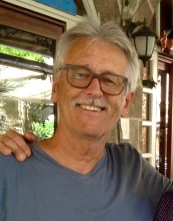 Pes mas gia ton eaftó sou (Tell us something about yourself), John… I was born in Bath, in the UK. I always excelled at art during my school years, numbers do my head in! It was a toss-up between design and writing as a career choice, but design won by a whisker. I met my wife on a night out and we’ve stayed together now since the mid-seventies. My mother-in-law was Greek, and thus began my education in all things Greek. We moved to Rhodes in 2005, and that’s when I began writing in earnest.

What first inspired you to write?  It’s always been something I liked doing. One of my best subjects at Grammar school was English Language. My whole Greek experience over the years has been my main inspiration for the 11 books I’ve now published. After reading works by Peter Mayle and Bill Bryson, I rather immodestly thought – “I could do that!”, so I did! Maybe not with the same results though.

What was your first piece of creative writing? How old were you?
I began writing what became my first ‘memoir’ work, “Feta Compli!” around 2001-2, I think. It started out with the working title of “Lela’s Daughter”, since my mother-in-law’s name was Lela. I didn’t have a lot of time to write, though, back then, since I was working quite long hours as a

graphic designer. It was when we made the move out to Rhodes that I decided to get on and see if I could finish it. It came out as a paperback around 2009, and in Kindle format in 2011. I would have been in my late forties when I started “Feta”, and I was 56 when it was published. Don’t tell anyone though.

Which writers do you particularly admire?  That’s a hard one. I enjoy anything that’s well-written. I’m a bit ‘old-

fashioned’ in that I don’t like blood and gore, or books that are peppered with expletives. So I’d have to say that authors like John Grisham and Robert Goddard have both written a lot of books that I’ve enjoyed reading. Lately I’ve also enjoyed a couple of books by C. J. Sansom, who writes about true events from the late middle ages, but in novel form. You get educated whilst also being entertained. I’ve already mentioned Bill Bryson, who always gets me rolling about with laughter, which we

all need in shedloads if we’re to have a good quality of life! I do also quite like Harlen Coben now and then. I read all of Thomas Hardy’s and George Eliot’s works when I was younger, too. I don’t restrict my reading to books on a Greek theme, though I do read a few each year.

What do you love about writing?  When I’m writing fiction I love the way that a story tends to create itself as I write. It’s very intense for me when I’m at the MacBook. I start out with a basic idea and get really excited as twists in the plot almost seem to write themselves. I can’t put it any other way. Reading back over a chapter and feeling it grab me is a thrill too. I have

to read back over my words and try to see it as would someone reading it for the first time. If it pleases me when I do that, then I’m impatient to get on with the rest.

What do you hate about writing?  The time it takes. What do I mean by that? I suppose basically, once I get three quarters of the way through a book I’m impatient to get it finished so my editors and my wife can read it. I long to hear their feedback. Also, I’m not a particularly good typist, so I don’t like the fact that I’m continually reading back over my

words and having to correct errors. Auto-correct and spellcheck only do part of the job!

Describe your ‘portfolio’ of writing… I’ve written five lighthearted ‘memoir’ books all about my Greek experience, starting from when I first met my half-Greek wife. The first four are part of the “Ramblings From Rhodes” trilogy – in four parts (told you my maths isn’t good!). The fifth [A Jay in the Jacaranda Tree] is alook back over our first ten years living on Rhodes. I’ve also written six novels, which truly amazes me! I never even thought I could write one work of fiction before I started on the first. To have now published six – well, I can’t quite believe it either!

What is your proudest achievement?  Having a marriage that’s lasted four and half decades. Regarding my writing, it has to be my latest novel, Panayiota.

What is your current project?  I’ve only just seen Panayiota published, so I haven’t started on the next project yet. I do have one or two ideas bouncing around in my head, but nothing’s good enough to make me start on it. Each time I’ve finished a book, I’ve vowed not to start anything again unless I can think of a good enough

plot, one that I believe would engage me, were I to read it for the first time.

Anything you’d like to add?  I started a Facebook group called A GOOD GREEK READ in February 2015 after trawling the web for a book with a Greek flavour. Members can post a link to a book, a blog or other internet source for a good Greek read. It also includes news events and requests for advice. The only prerequisite for posting is to include an appropriate link of interest and/or books (factual or fiction) on Greece or Cyprus.

Our membership is international and now stands at around two and a half thousand, including an impressive list of authors, including Kostas Krommydas, Anne Zouroudi, Sara Alexi and many others. Anyone who likes Greek-themed reading can use AGGR as a ‘virtual’ library.

Thanks for this opportunity to take part, Lynne. I’ve enjoyed it. I hope that someone out there will maybe give my work a try.

Efharisto, John. Always delighted to greet a fellow Grecophile (or is it Hellenophile?)…