Maybe Tuesday will be my good news day…

Struggling to find a pithy title for the post, this is what I came up with – only to realise it had been done before – by George and Ira Gershwin in ‘The Man I Love’ (Ella Fitzgerald’s wonderful version). Took me a while to get there, via a mistaken dalliance with ‘Spread a Little Happiness’ (Vivian Ellis, Clifford Grey and Greatrex Newman – really? – from the musical MR CINDERS, 1929, and covered by Sting in Dennis Potter’s BRIMSTONE AND TREACLE, 1976. Yes, I did look it up – so you won’t have to.)

Thing is, it was only through working at Guildford School of Acting and directing a compilation of Gershwin music that I became so familiar with Gershwin tunes and lyrics. I put together a linking script which required the usual research – more meticulous than the press of George’s day who reported him as being out and about with his lovely wife Ira – Ira, of course, was his lyricist brother.

I wrote a lot of material for drama schools, including  three Dickens adaptations commissioned by the then Principal of GSA and still my good friend, Professor Michael Gaunt. I’m always tickled that I have a professor as a friend. In fact, I have two exalted academics in my friendship armoury, the other being Professor Ros Steen, a highly respected voice specialist whom I worked with at the Royal Scottish Academy of Music and Drama / RSAMD (now Conservatoire). And there’s the link.

In 1985, the RSAMD commissioned me to write a play-in-progress as a term project for Second Year Students, then take an expanded version to the Edinburgh Festival. As a huge fan of Mike Leigh, I worked with the students on character and incorporated their thoughts and ideas. The start point was Breughel’s ‘Peasant Wedding Feast’.

The narrative could have gone in any direction, but the students favoured Breughel’s life, so that’s where we went with it. It turned out to be a fine play, even if the dialogue was a bit clunky in places, for which I take entire responsibility. We called it A COUNTRY WEDDING. This was the final scene in Edinburgh – 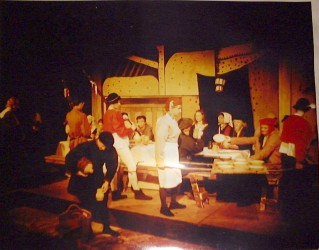 In fact, Ros’s daughter, Stefani Steen as was, appeared as Breughel’s daughter, Mayken, in the drama school version. She took a more sensible route in life than theatre.